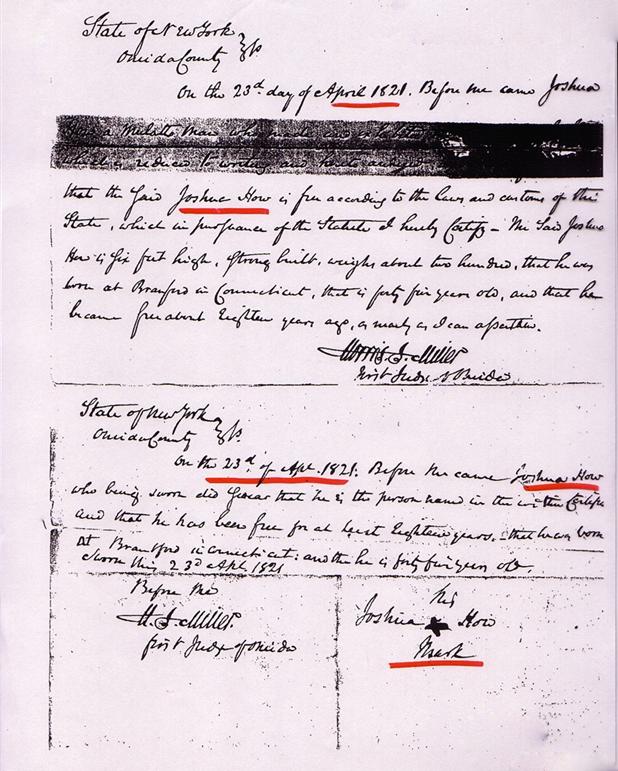 ​In 1915 Thomas Proctor, one of the County's most influential men, dedicated a 6-ton boulder as a monument to celebrate Joshua Howe as an Underground Railroad Stationmaster. Two contemporary newspaper articles noted that an inscribed metal plaque would later be attached to the boulder. We have located the site of the boulder, "near the flagpole in the South Woods." However, we can find no trace of the boulder nor Howe's homestead.

Howe was born in slavery in Branford, Connecticut in 1776. He was free by the time he arrived in Oneida County, and first appears in the 1810 US Census as heading a household of 3 dependents. In his 1821 sworn testimony that he is a free man of color, he is described as "a mulatto, being six feet high, strong built, weighs about two hundred pounds." He lived on "the Gore," a strip of land in the Town of New Hartford, now Utica's Roscoe Conkling Park. The 1835 NY State Census lists his possession as: 20 acres of land and possessing 6 meat cattle, 2 horses, 7 sheep, 1 hog, 17 yards of cloth "manufactured in the domestic way," and 5 yards of flannel. He last appears in the US Census in 1840.

We do not know when he died. A 1915 newspaper wrote that he is buried in Utica's East Hill Cemetery. However, there is no trace of his grave, nor mention in the cemetery's records.