In the 1830s about 250 of the county’s 650 African Americans lived in Utica. Most lived in the mixed-race neighborhood of Post Street, just a few blocks away from the Erie Canal and the center of the city. Many worked in the hotels, liveries, restaurants, boarding houses, laundries, taverns, and barbershops. They were often the first to know of approaching slave-catchers. They housed freedom seekers and guided them to the next station on the Underground Railroad.

African Americans were vital to the success of the Underground Railroad. Freedom seekers sought out black residents for protection and direction. Organizations of free blacks aggressively challenged slavery and legal discrimination. They published anti-slavery newspapers and books, conducted speaker tours, contributed money, and sent petitions to Congress. Many fought in the Civil War. Like African Americans throughout the country, black Oneida County residents offered a determined and effective resistance to slavery. Utica in particular was described as “in advance of the cities of the North in regard to freedom--and its anti-slavery attractions secured the residence of an intelligent and spirited colored population.” (Jermain Loguen 1859)

In 1836, nine years after slavery ended in New York State, Post Street residents rescued two imprisoned freedom seekers on Genesee Street and sent them further along the Underground Railroad to Oswego. This was called the Utica Rescue. In 1846 William Johnson, barber and black Post Street resident, worked with white Abolitionist Wesley Bailey of Devereux Street to convey two freedom seekers out of Utica to Paris Green. That same year J.D. Green from Kentucky, was recaptured on Post Street and returned to slavery.

Post street residents Rev. James Fountain, Benjamin Anderson and Tucker Woodson were active in the Negro Convention Movement, along with other black Oneida County residents, including Francis Lippin and Rufus Wills. They attended conventions in Rome, Syracuse and Buffalo where participants demanded an end to slavery, rejected the Colonization proposal and insisted on equal voting rights.

At least 50 black Oneida County residents served in the Civil War, including William Henry and C.W. Lloyd, who is buried in Utica’s Forest Hill Cemetery.

African American citizens of Oneida County exerted critical influence on the Abolition Movement and the success of the Underground Railroad, uniting blacks and whites in a common cause. 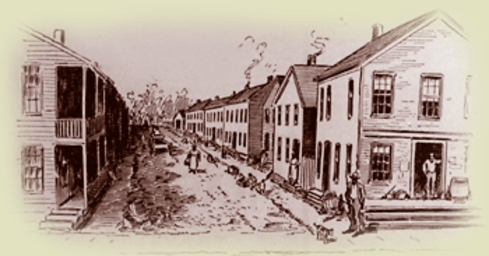