​​​Abolitionists and Underground Railroad operatives confronted strong opposition in the North as well as the South. They faced prison, financial ruin, and death, especially in the South.  Most whites viewed abolitionists as misguided troublemakers at best. At worst they were considered traitors, inciting mass murder, and intending to “amalgamate” blacks and whites.

The sudden rise of the Abolition Movement deeply alarmed white Northerners, but  Southerners were particularly outraged by their message. Fears of slave revolts like the bloody Haitian Revolution of 1791–1803 and Virginia’s 1831 Nat Turner’s Rebellion were always on Southerners’ minds. David Walker’s 1829  “Appeal to the Colored Citizens of the World” called for slaves to rise up against their masters and to defend themselves.  Abolitionist newspapers and pamphlets were numerous enough by 1820 that South Carolina instituted penalties for anyone bringing written anti-slavery material into the state.  Several Southern states formally requested that Northern states to suppress abolition groups and their literature.

A backlash of anti-abolition riots broke out in many Northern cities between 1831 and 1835, including New York, Philadelphia, and Utica. The U.S. House of Representatives adopted a gag rule, automatically tabling abolitionist proposals and petitions. In 1834 Alvan Stewart and Beriah Green were burned in effigy by a Utica Mob. Many of Utica’s political and business leaders and workmen opposed anti-slavery activity, especially conventions and newspapers. With Utica’s prosperity growing, they feared it could damage Utica’s reputation with Southerners and national political parties.

The creation of the New York State Anti-Slavery Society established Oneida County as an important center of the Abolitionist Movement. Despite the riot, the New York State Anti-Slavery Society met at the church the following year and again in 1837. New York’s first state-wide Abolitionist society linked Utica and Oneida County to the larger national Abolitionist Movement. The rioters’ challenge to freedom of speech prompted philanthropist Gerrit Smith, one of America’s wealthiest men, to support the Abolitionist Movement, to lend financial and political support to the movement, as well as a safe-house for fugitives. Many other local delegates, such as James DeLong and Beriah Green, became active in Oneida County’s Underground Railroad following the Utica Riot.

​Who Opposed the Abolitionists?

Why Did The New York State Anti-Slavery Society Convention Take Place In Utica?

The Convention to establish the New York State Anti-Slavery Society met in Utica because of Oneida County’s fiery Abolitionist leadership, the influence of the religious revival movement, the city’s unique location, and the concentration of Abolitionist organizations and printing activity.

The fledgling Abolition Movement took root in Oneida County in 1833 with the arrival of Beriah Green at Whitestown’s Oneida Institute of Science and Industry. Green transformed the school into the nation’s first multi-racial college, dedicated to the “radical” principals of Manual Labor and Abolition. By 1835 both Green and Utica’s Alvan Stewart had gained national recognition for their anti-slavery efforts. When they proposed that a convention meet in Utica, Abolitionists from across New York heeded the call.

Oneida County was part of the “Burned-Over District” of the religious revivalism movement in the early 1800’s.Many revivalists believed that “faith without deeds is useless” (James, 2 v. 20) and put their faith to work for the abolition of slavery.

n the 1830’s the Erie Canal was America’s most important east/west transportation system, carrying goods and people, as well as news and ideas. Utica’s central location along the Erie Canal, connecting Buffalo and New York City, made it an ideal place to meet.

After William Lloyd Garrison published The Liberator (considered the “voice of Abolitionism”) in 1831, Abolitionist literature quickly appeared across Oneida County. Utica’s Standard and Democrat, a pro-Abolitionist newspaper, began publication in 1835. In 1836 it was replaced by the NY State Anti-Slavery Society’s The Friend of Man.

Thanks to Oneida County's dynamic and well-led Movement, Abolitionists gathered in Utica for this historic event. 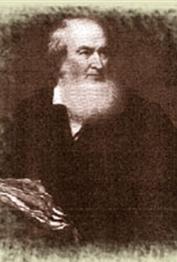 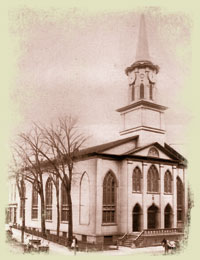 The years 1833 to 1860 were characterized by a great debate throughout the country on the question of the abolition of slavery. While slavery had been abolished in New York State by 1827, slave owners in other states where slavery was an established institution could recover runaway slaves who escaped to free states. Since a slave was considered an item of property instead of a human being, the owner could present proof of ownership to a local magistrate, who was required to issue an order for the slave’s arrest and return to the owner.

Certain citizens of Oneida County, and particularly Utica, played significant roles in promoting the immediate abolition of slavery as an institution throughout the country. The American Colonization Society was organized for the purpose of purchasing the freedom of the slaves and returning them to Africa. The Rev. Beriah Green (1795-1874), the head of the Oneida Institute of Whitesboro, was an outspoken foe of slavery on moral grounds and was opposed to the colonization idea as the alternative to abolition.

It is difficult today to appreciate the deep division and strong feelings which existed in Utica during those years between abolitionists and those who were indifferent to, or supported the "peculiar institution" Many believed that the abolitionists threatened the economy and could ultimately destroy the Union.

In 1832 Alvan Stewart, an abolitionist lawyer, moved to Utica and started the Utica Anti-Slavery Society. He and Rev. Green issued a call for a State Convention to be held in Utica on October 21, 1835, for the purpose of forming a State anti-slavery society. It was proposed to hold the meeting in the courtroom on the second floor of the old Academy at Chancellor Square, but group of citizens met and declared that the hall of justice should not be desecrated by such a radical meeting. As a result, the Common Council rescinded its permission and arrangements were made to hold the convention at the Second Presbyterian Church (later the Bleecker Street Baptist Church) on the corner of Bleecker and Charlotte streets on October 21, 1835 at 10 a.m., and among those invited to attend was Gerrit Smith.​ Smith came to the convention merely as a spectator, but his experience here was to change him from a passive to a militant abolitionist, one of the greatest in the country.

Anticipating resistance, Stewart and Green convened the convention at 9:00, an hour earlier than announced. A resolution was quickly passed that formally established the New York State Anti-Slavery Society. By 10:00, a large group of anti-abolitionists had gathered at the Utica Academy. After passing a formal resolution to establish the New York State Anti-Slavery Society, am"Committee of 25," led by Judge Chester Hayden and U.S. Representative Samuel Beardsley, disrupted the convention and demanded that it disband immediately. When the abolitionists refused to leave, the riot ensued. There was much noise, hymn books and other missiles were thrown about, personal attacks were made, and violence threatened against Alvan Stewart.

Gerrit Smith was so moved by the actions of the mob that he invited the delegates to reassemble at his estate at Peterboro and continue the proceedings. The Convention reconvened the next day at the Presbyterian Church in Peterboro, 27 miles southwest of Utica, and Gerrit Smith was selected as chairman.